Bogota, the capital city of Colombia, is far bigger than any of us can imagine. The size of this city it’s comparable with New York City or Mexico City.

Be prepared to be amazed, here you will find the historic neighborhood known as La Candelaria, panoramic, breathtaking views of the Cerro de Monserrate, and many more touristic attractions.

One of the oldest museum-church; this place was built in the 17th century and is filled with the most extravagantly decorations with ornate features painted in gold, nearly 150 sculptures, and saints’ paintings decorating the walls.

This church has been transformed by the government from a church to a museum and it’s a must-see landmark in the city.

In the district of Chapinero, you’ll find Parque 93, considered a hotspot in Bogota where you can find the best places for dining and living the nightlife in Bogota. In the afternoon Parque 93 is one of the best places to take a walk and enjoy the sunshine. This park is one of the preferred venues to celebrate art or music festivals. During the evening, travelers from all over the world enjoy the trendy restaurants and coffee shops.

The nigh life is very active in Bogota, because the place brings together several music places and beautiful, green recreation parks. Traditionally, the park is decorated with very impressive Christmas arrangements.

Cerro de Monserrate, with 3100 meters of altitude, is one of the most famous viewpoints in Bogota, in the east cordillera.

It has suffered wildfires and deforestation, but still keeps an important part of the Andean forest. The tourists can ascend by walking, cable car or funicular railway.

Although, many people ascend to contemplate the view of the capital city of Bogota, the real touristic attractive is the Basilica of the Señor de Monserrate, a place or peregrination since the colonial period.

If you want extraordinary photos from your trip to Bogota, you can’t miss La Candelaria, the most emblematic neighborhood in the center of Bogota.

Walk by the narrow and steep streets, admire the petit, full of color houses from the colonial times with doors with symbols with historical meaning from the Spanish era.

Other neighborhoods from downtown are Egipto, Belen, Las Agua or Germania. Here you will find the most beautiful buildings in Bogota: The Casa de la Moneda, the Teatro Colón, La Quinta de Bolívar, among others.

If you want to know more about what you can do in Bogota, visit Alegre Spanish Schools and study Spanish in Bogota while you stay in the best city of Colombia. 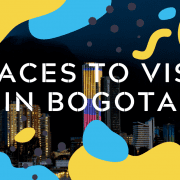 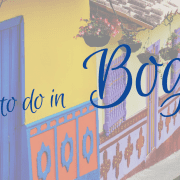